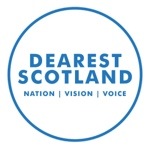 Last night I went to a pretty interesting event run in part by a friend at college. It was in the nearby Glad Cafe which is a great space that hosts really diverse events and does really good cake. The project is pretty simple, it involves people who live in Scotland, used to live in Scotland or are maybe just here for a while to write a letter to the future of Scotland. This can include anything from favourite things about Scotland to memories of being Scotland. It can also include what you like about Scotland and you’re hopes for its future. It sounds pretty simple but is ambitious in its scale as it hopes for at least 10 thousand letters to be written.
The launch was interesting and was very well done. There were packs with letter kits and even branded pens. More importantly there were many diverse and interesting conversations going on about what Scotland is and what it means to everyone. These conversations were prompted by a series of flash cards with questions such as if Scotland were a person what would it be like? What is your favourite memory in Scotland and what Scottish traditions do you keep? A particular favourite was why does it always rain on me? My guess is it’s because I lied when I was seventeen.
One of the great things about it is that it is completely non political so you get involved if you’re an aye, naw or mibbe when it comes to the referendum. That said it is the referendum debate that has in part prompted us to think more than ever before about Scotland, what it means and what the future means.
I advise every Scot to do a quick search for Dearest Scotland and get the pens out.